A clandestine conversation with an incognito cultivator 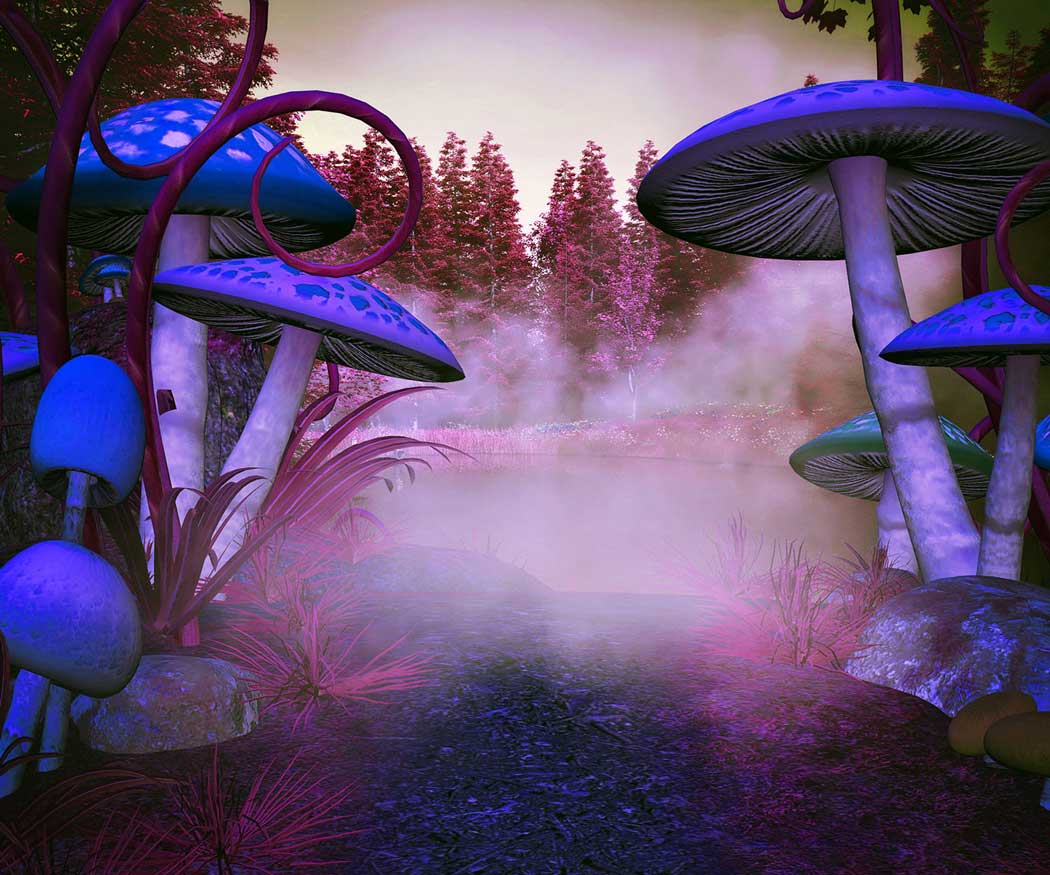 It’s a weekend in July and I’m sitting outside a Starbucks in Los Angeles to interview a magic mushroom cultivator for Psychedelic Spotlight. It’s been set up by a third party. I don’t know the name of the man I’m about to meet.

I’ve offered to wear a red knit cap so he will know me. Now I’m worried I’m attracting too much attention because I couldn't find the cap I had in mind so now I’m wearing my wife’s red ski hat which has a rainbow pom pom.

He arrives right on time. “You must be Kent.”

It’s Covid times so we don’t shake hands, just wave awkwardly. Once we are seated at a safe distance we take off our masks.

He looks like English singer-songwriter Ed Sheeran. I’m actually not sure it’s not Ed Sheeran. Over the next few minutes I find myself straining to detect any trace of an accent. Did Ed Sheeran move to Los Angeles? Lots of English celebrities do.

Before I get into my interview with Ed, I want to share a few things I’ve learned about the biology of mushrooms.

For starters, mushrooms aren’t plants. You thought mushrooms were plants, didn’t you? So did I. So did everyone, actually. Scientists used to publish fungi articles in plant journals. But they have since learned that fungi have more in common with animals than with plants.

By the way, “fungus” is just the Latin word for mushroom.

So mushroom growers like Ed Sheeran refer to the product of their efforts as “fruit.”

I ask Ed how he became interested in growing magic mushrooms.

“It started when I moved here from across the country,” Ed says. “And I just came up with the idea of growing mushrooms on the side. I had tried some back home. I thought, these are cool. Looked it up, did some research, and it sounded pretty straightforward.”

The first thing you need are mushroom spores, which are easier to get than you might think.

The majority of Americans can easily buy magic mushroom spores online. Spores usually come in pre-sterilized syringes, ready to be injected into whatever growth medium you’re going to use. I did a quick Google search and found multiple sites with dozens of different psilocybin mushroom spores on sale for between ten and forty dollars.

Theoretically I couldn’t buy them myself because the three states in the US that prohibit the sale of spores are Georgia, Idaho and — you guessed it — California.

“If you’re a California resident and you try to order spores, no one is really going to ship to you,” says Ed. “Kind of a funny story. What I ended up having to do was shipping everything to my mom who lives in a state where they are legal and then had her ship it to me.”

So he wasn’t worried about the DEA’s mushroom sniffing dogs at the post office?

“I think they put all their energy into the dangerous stuff,” Ed says.

It turns out it doesn’t take a big investment to get started growing mushrooms. Ed tells me his own startup budget was inflated by a common kitchen appliance. “I think I invested four hundred dollars and it was only that much because I bought a nice pressure cooker.”

Ed assures me you could definitely start out for less than two hundred dollars, especially if you buy used materials online.

“You don’t need a lot of technology or special equipment,” Ed says. “You can even grow a lot of this stuff outside.”

I ask if the pressure cooker is still his most advanced farm machinery. “I have a flow hood, which is basically a giant HEPA filter attached to a big blower,” Ed says. The hood creates a steady flow of relatively sterile air while he works which greatly reduces the risks of contamination. “I would say that’s my most sophisticated piece of equipment.”

Ed describes his setup as a modified mini-greenhouse, hooked up to a timer and a humidifier with a fan that pumps in moisture on a regular schedule to create what he calls a “fruiting chamber.” The idea is to mimic natural environments that mushrooms love, with high humidity and lots of airflow.

“In terms of where I currently live that’s the most sophisticated I can get,” Ed admits. He tells me he’s planning to move in the next month or so. He’s looking forward to getting a two-car garage. “I’m going to insulate and frame out a special lab area where I will have a dedicated cleanroom to do all my lab work.”

I would have thought Ed Sheeran already had a two-car garage. Have music sales been struggling? I haven’t been following his career.

Ed tells me that if I want to see what a really large operation looks like, I should check out a feature VICE did recently on the largest truffle farm in Amsterdam.

In the documentary, available here (The Rise of Psychedelic Truffles in Amsterdam), the “Truffle Brothers,” Ali and Murat, show off a class 100 cleanroom, which means that only 100 particles of 0.00096 microns may be present in one cubic foot of air. “A normal hospital operating room,” Murat tells us by contrast, “has 10,000 particles per cubic foot of air.” Their farm has the capacity to produce 1,500 tons of truffles a month, which is three million pounds.

Ed has some catching up to do. “I would say every month I average between four and five pounds.”

His long-term goal is to have a farm once psilocybin is legalized, which he anticipates will occur within the next three to five years in California.“I definitely want to get bigger and bigger.” Ed’s not sure what he will do if it’s merely decriminalized. “Would I get a commercial facility to rent out? I would definitely consider it. It might be prudent to wait for full legalization.”

When I ask about the biggest hurdles to successful legalization, he points to potency and dosing. “I know the cannabis industry had that problem, especially when it was first legalized.”

The difference between mushrooms and cannabis, Ed explains, is that cannabis has a relatively stable THC concentration per strain. With mushrooms, each “flush” — the term growers use for an individual batch or harvest —  is going to have different concentrations of active ingredients, making it harder to regulate dosing.

Ed tells me even the individual mushrooms within a flush will contain different amounts of psilocybin. “You could have the same tub of mushrooms, with the same clone, you pick one on one side and it will send you to the moon. Then you eat one from the other side and it’s like yeah, I don’t really feel much.”

I ask if he eats the mushrooms to test potency. Ed looks at me with what can only be described as pity. “You could do that, but I don’t think eating the mushroom would be the best way to go about it.”

Ed says the only definitive way to test for psilocybin is to use gas chromatography to measure the concentration within the fruit body. “That’s definitely way above my skill level, and expensive, so I don’t really do that. The simplest way would be to look at the amount of bluing.“

When psilocybin comes into contact with oxygen, Ed tells me, it creates a bluish hue. So if the mushroom is touched or damaged it will lead to a blue bruising on the fruit body. Some mushrooms even bruise black because they have such high concentrations. “So if something bruises deep blue,” Ed says, “That would be a good candidate to clone.”

Like a lot of people in the psychedelic space, Ed is excited about psilocybin’s possible medical benefits.

“There’s so much hidden potential in nature that we just openly discredit for whatever reason, arbitrarily,” he says. “We need to investigate this further. Every year it seems like we are learning so much more than we did the previous year. With all the promising work that MAPS is doing, and Beckley Foundation — PTSD treatment, treatment of other traumas, psychological disorders — I feel like this could be another miracle drug.”

Ed tells me he offers pre-made capsules for micro-dosing, but those don’t really sell as well as the fruits. “Some people who buy the fruits tell me that they do grind them up and make their own micro-doses.”

Ed guesses only twenty-five percent of his customers use mushrooms as medicine as opposed to recreationally. But he chalks that up to education. “It’s kind of like that old-school DARE mentality, oh if you eat some mushrooms you’re going to go crazy and we’ll have to put you in a mental institution,” Ed says, laughing. “I don’t know how many people realize that they can integrate this into part of their day for daily health, kind of just like you would a vitamin.”

Ed would like to see limits on pesticides and chemicals — he doesn’t use any — and he sees the value of having the state come up with certain testing parameters to determine the potency of the product. Labeling is important, as is child-proof packaging. He supports standards for facility cleanliness, safety and water usage.

“I think the push to legalize cannabis was all about, oh well it makes sense, spelled C-E-N-T-S, and I think that’s the wrong approach. We have something that lots of people are going to be using for medicine. We have such a problem with healthcare in this country now, to make a new medicine costly is kind of counterproductive. That’s my biggest concern in terms of legalization of psilocybin. We don’t want to tax it to death and inhibit its growth. We want to make it available.”

Before we wrap up, I ask Ed if there were any subjects I missed, anything he really wants to say.

He grins and points at my head. “Nice hat.”

Definitely set myself up for that one. Maybe he’ll write a song about it.