Ketamine therapy is emerging as a potent treatment for addiction. Colorado-based therapist Craig Salerno explains why. 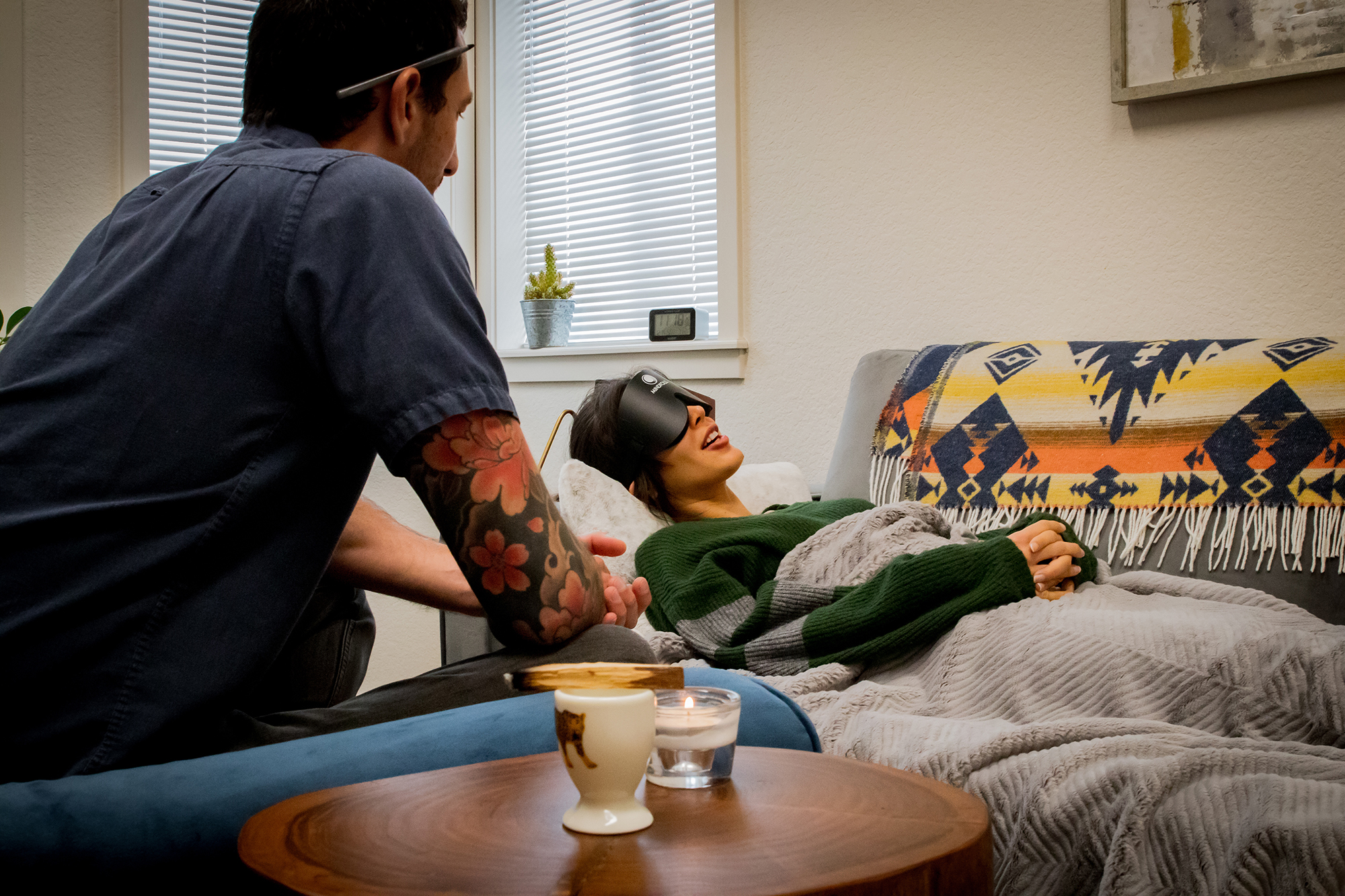 Craig Salerno has seen too much senseless death. “Unfortunately, I can no longer count on my hands how many people I’ve witnessed overdose, die, suicide, and to me, it's an absolute crisis. Addiction is a crisis and it appears to be on the rise.”

As a Licensed Professional Counselor and Licensed Addiction Counselor in Colorado, Salerno has been working with addicts for over a decade. In a society that often labels addicts and alcoholics as weak, feckless or corrupt, Salerno takes a different view.

“People who struggle with addiction are often deeply attuned, deeply sensitive, genuinely awake and aware people,” Salerno tells me. “Often times addicted individuals are medicating their hypersensitivity to a world that is very disorganized and out of control. From my perspective, losing these individuals is culturally traumatic.”

Although he never experienced addiction himself, Salerno’s teenage encounters with psychedelics and marijuana were a major influence in his decision to pursue a career in psychology. “I thought, this is very curious, the way drugs and alcohol tickle the mind and the experiences they bring up,” Salerno says. “And it got me very interested in studying the mind and the impact of substances on the mind.”

He earned a bachelor’s degree in Psychology from Colorado State University, and it was during his senior year that Salerno first confronted the addiction conundrum. Salerno got an internship at a treatment center called Turning Point in Fort Collins, Colorado, working with adolescents struggling with substance abuse issues.

He learned quickly that opinions and strategies formed in the classroom did not seem adequate to the challenge.

“It was pretty disheartening. The thing that stood out for me was that, relationally, I felt like I could connect very deeply with the clients and the adolescents. But in terms of understanding and effectively working with the addiction, I felt extremely incompetent and like I did not know what I was doing. And I realized quickly, this is way bigger and more challenging than I thought it would be.”

Still, the experience proved invaluable. “It was great, because that place humbled me very quickly. I went in, I started working. And it was like, I have no idea what I'm doing. I need to pursue a lot more education,” Salerno says. He enrolled in Naropa University in Boulder, Colorado, where he got a masters degree in Contemplative Psychotherapy.

Addiction is a multifarious condition, a brain disease that causes an all-consuming obsession with alcohol or drugs. Addicts will continue using a drug despite being fully aware of the damage it is doing. Psychiatrists have studied addicts via brain imaging, demonstrating changes in the areas of the brain that relate to judgment, decision making, learning, memory and behavior control.

Addiction is a chronic disease, so people can’t simply stop using drugs for a few days or months and be cured. In most cases, once a person becomes addicted to a drug, the only way to overcome the addiction is to abstain from using that drug indefinitely.

Rates of success vary depending on the drug or the population being studied, but anyone working with addiction can tell you relapses are depressingly common. And often deadly.

Some of the victims are household names: Mac Miller. Amy Winehouse. Tom Petty. Prince. Wikipedia has a page that lists over 600 celebrity deaths from drug overdose and intoxication.

I asked Salerno about what it was like to treat addiction before he started incorporating ketamine therapy into his practice.

“It felt more like hospice work, if I am to be honest, until I started utilizing psychedelics. More like, how can we help people have a better experience in their lived day-to-day, even understanding that addiction is a highly volatile and violent illness, and it will inevitably kill a lot of my clients. In that way, it feels like hospice, just helping people have a better day today, and letting go of the attachment to long-term outcomes and success.”

Which is why Salerno says it's so exciting that psychedelic therapy might offer new hope.

“Since the psychedelic medicines have come on board, it's really opened up a new avenue that can go way deeper and liberate people from addictions quicker and more effectively than I ever knew we could. And that's where I get really excited,” Salerno says. “This needs to be explored more, and we need to continue pumping out research and getting people to start seeing this as a viable treatment option.”

Salerno is quick to emphasize psychedelic therapy is not for everyone.

“When we do ketamine therapy, we work collaboratively and have medical oversight the entire time. If someone has a predisposition to psychosis, then psychedelics definitely increase the risk of people having a manic episode or a psychotic episode. That's the importance of doing this professionally and with a lot of care and supervision.”

Ethically and responsibly as a clinician, Salerno feels he needs to be mindful. “We don't just pass this out to everybody. We don't make it seem like, wow, this is a magic cure. This is one road of treatment, often supported by additional therapy and connection that increases the success rates. ”

Salerno believes it’s best to try conventional forms of treatment and therapy first. “However, if you're deep and suffering, if you're addicted and you think you're going to die and you've tried all these other models, psychedelic therapy should be looked at as an option.”

I ask how he actually uses ketamine in a clinical setting, and Salerno explains there is a lot of research about ketamine and its effectiveness with depression. “So, if we know some part of the underpinning of the addiction is depression, typically we work multiple sessions a week with ketamine and it's proven that when you use this medicine cumulatively, it tends to have stronger results.”

He’s talking about six sessions in four weeks, doing low-dose lozenge sessions, where the ketamine is administered in dissolvable tablets. “We call it trance dosing,” Salerno says. “Typically with that dose, with the lozenge, they are staying present in the room, they can still process verbally with you. They’re definitely altered, and they're experiencing a shift in their consciousness, however, they typically are able to stay engaged with the therapist and explore therapeutic material related to their addiction. You can do in-depth process work and talk psychotherapy and the medicine offers new perspective and depth to the sessions.”

Toward the latter end of the six sessions, they do intramuscular dosing, which he calls “transformational dosing.” It's a much higher dose. Salerno tells me this is why ketamine is called a dissociative medicine.

“It’s an ego dissolution experience. You won't be aware that there's a clinician in the room. You can travel pretty far into a psychedelic journey, and these tend to have more spiritually shifting experiences, so less talking, and more processing internally. You’re experiencing shifts in meaning, perhaps understanding your addiction from a different angle, and even shifting your understanding of who and what you are in this world.”

Salerno says both doses have immense value. “We’ll do a different series of dosing depending on what the client is working on, where their core traumas are, what kind of work we want to do.”

A lot of people will do these six sessions in the initial four weeks and then take a break and do integration therapy, just focusing on talk therapy.

Other people will work weekly with the ketamine, staying with the low-dose lozenge to create “processing space,” and that is enough of a catalyst to do some of what Salerno calls “the deeper attachment work.”

“So there are a lot of different ways that we use it,” Salerno explains. “And it's really the intuition of the clinician, the client, and then also the medical provider who oversees the treatment.” Salerno describes a process where the clinician and the medical provider work with the client to form a treatment team. “It's very collaborative and communicative and safe. We’re just trying to work individually with each client to see what works best.”

I ask Salerno if he’s tried ketamine himself. He has.

“I think it's important and valuable for a psychedelic therapist to have their own experience with the medicines. Mainly because people will be curious or afraid and any bit of orientation you can give someone helps. You really want to help them feel relaxed and safe. Sometimes a bit of self-disclosure around personal work with medicine can help. Do I think it's a requirement? I don't know. Not necessarily.”

Salerno doesn’t want to worship ketamine like it’s the missing piece to addiction counseling. “It's just pointing to the idea that psychedelic medicines in general — psilocybin, MDMA, LSD, ayahuasca — potentially have a lot of benefits to bring to the addiction world. Instead of using substances to check-out, we use them to check-in and move towards the discomfort. We are turning addiction on its head.”

Ketamine is well known to the medical community. It’s been used as an intravenous anesthetic since 1970. Since it’s legal and routinely prescribed by doctors, ketamine is easily adapted to therapy by trained clinicians. But Salerno believes ketamine is just one example showing us the potential benefit of using psychedelic medicines in combination with psychotherapy.

“My hope and my dream is that, as we do more research and learn more about all these other substances and their long-term impact, that more people who are experiencing addiction and pursuing recovery will have the option of utilizing some kind of psychedelic medicine in combination with psychotherapy — and a thank you to everyone who's doing research to take us in that direction.”

Salerno has spent many years on the front lines of the battle with addiction, and sees the problem is only getting worse.

“If we don't figure out way more creative models for working with addiction, and if we don't explore this idea of how we heal the deeper parts of addiction, we're doing a disservice to the individuals, the families and the culture,” Salerno says. “We’re losing magical people.”