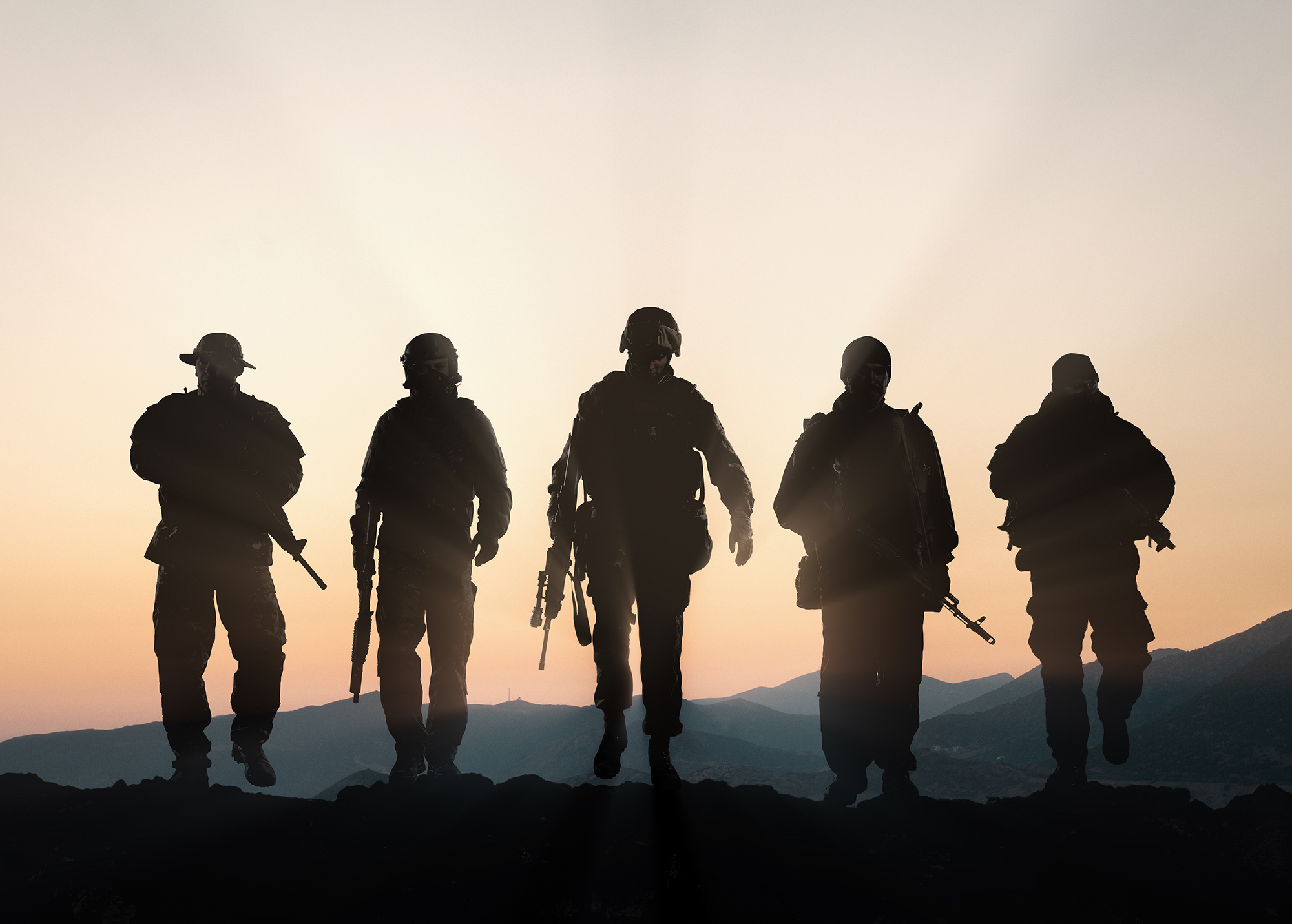 On an improvised 70-mile marathon through the Andes Mountains of Peru, alone and severely dehydrated, it occurred to Jesse Gould that he might die.

A former Army Ranger, Gould knew about pushing himself to the physical limit. Now his experience and training told him it was time to worry.

He was out of water. His destination, the historic Inca citadel of Machu Picchu, was miles away. Hiking across the steep, rugged terrain of the Salkantay Trail — in the native tongue “Salkantay” means “savage” or “wild” — Gould was exhausted, soaked in sweat and unable to think clearly. ‍

In the Wake of War

Jesse Gould is the President and Founder of the Heroic Hearts Foundation, a non-profit organization that connects military veterans with ayahuasca therapy. How he found himself suffering on this ancient mountain path in South America is a useful metaphor for understanding the challenge Gould confronts now.

Gould studied economics at Cornell University before starting work as an investment banker. “Working in New York, I loved it. I loved finance, liked how money moves through institutions, just the whole economic perspective,” Gould says. “But there was a very self-serving mindset. There wasn’t any giving back. And I really respected people that served a higher purpose than themselves.”

Just over a year into his promising career, Gould surprised everyone by enlisting in the Army. “When I told my family I was joining it was completely out of left field,” Gould says. “My mom was devastated.”

It was hard to understand. Why would someone with a degree from an elite university give up a promising career in finance to go to war?

“At the core of it, my gut was leading me to serve,” Gould says. “It was just something I needed to develop as a full person.”

Most people with a college education who join the army go through officer candidate school, beginning their careers as commissioned officers.

That wasn’t what Gould wanted. “The people in a unit that get the most respect are the enlisted people, the ones that went from private, served their time, ranked up and became a leader that way.”

So he just enlisted. Started at the bottom. Went from a Manhattan office to Fort Benning, Georgia.

What followed was four and a half years in the Army Rangers and three combat deployments in Afghanistan.

Gould was a mortarman, a soldier who operates a smooth bore, muzzle-loading weapon that fires shells — technically bombs — at a high angle for close-in support of ground troops.

The physical danger a frontline soldier faces is obvious. What’s less intuitive is the physical cost of preparing for war.

Especially if your job is firing rockets out of a metal tube.

“The hard part about it is the training environment,” Gould says, describing several types of mortars: 60 millimeter. 81 millimeter. 120 millimeter. “The 120 millimeter uses a thirty-two pound projectile, and that concussive force blasts through your chest.”

Gould describes training all day every day, week after week, in order to develop the necessary skills. “You are just shooting rockets back to back and you would do like what they call, “fire for effect,” 100-round fire for effects where you’re just back to back these huge concussive forces.”

The wear-and-tear of training didn’t stop there. “You’re doing door breaches, which uses explosives,” Gould says. “As an airborne unit you’re jumping out of a plane, you’re hitting the ground pretty hard, sometimes hitting your head.”

Once he was deployed in Afghanistan, physical demands were joined with mental exigencies. The strain, stress and trauma of soldiering are often more insidious than what a civilian might imagine.

“You hear PTSD, you’re thinking of what you’ve seen in the movies. For me it wasn’t that direct, like somebody dying in my arms,” Gould explains. “There’s always that high intensity, stuff going down around me, but fortunately I never was at the same spot as when somebody was killed. But I have been in situations where I was just at a base, I went to another base and one of the main people at that previous base just died. There’s this real existential thereat that you’re surrounded by. It’s just the nature of the life.”

It’s a timeless truth that no soldier comes back from war unchanged. In the wake of Gould’s military service he found himself suffering from severe anxiety.

“I would gladly do every single one of those things again, and a lot of people I served with would gladly do it all again,” Gould says. “You’re always going to be affected, especially if you had more traumatic events. It’s a question of what can you do now to give yourself some semblance of stability.”

That question — what  do I do now? — confounded Gould for years.

Jesse Gould’s decision to embark on his personal Peruvian ultra-marathon along the Salkantay Trail to Machu Picchu was a manifestation of his internal struggle.

“I had been down this self-hammering road of being unhealthy and not having confidence in myself, but I still had this weird Army Ranger machismo — which at that point was unfounded because I was not in the same shape or mentality.”

Later he would describe “the extreme realization of stupidity.”

Gould had already travelled more than twice the distance of a standard marathon, and it’s likely he’d climbed over six thousand feet before a long, grueling descent.

Just as fatigue and dehydration were becoming severe, Gould found false hope in the form of a rusty faucet. He filled a bottle. The water was bright orange. And now he was faced with an appalling decision. Drink this polluted water? Or risk pressing on?

Hikers add iodine tablets to questionable water in order to kill bacteria and viruses. Gould had brought iodine tablets — they were in his backpack — but he was so tired he mistakenly believed he had thrown them away.

He looked at the putrid water and made his choice.

“I thought, okay, this is plan B. Let me go as far as I can without drinking this.”

Gould remembers his salvation as weird and miraculous. He was very near the end of the trail when he arrived at Aguas Calientes, the last town before Machu Picchu. There were a number of shops and stores, but Gould had arrived at 5 a.m.

“The sun was just rising, and so everything was closed.”

In front of one store Gould saw a family that, for whatever reason, was up early and just hanging out.

“I said, hey, is the store open? I really need some water.”

The family apologized. The store was closed.

Dejected, Gould continued on, thinking about the rusty water he would soon be forced to drink.

He had gone about a hundred yards when a kid, ten or twelve years old, ran up and handed him a bottle of water. Gould offered to pay.

Jesse Gould isn’t a guy anyone would have imagined would have created a nonprofit organization that promotes psychedelics.

“I had no drug interests or background. Not even marijuana. I had very little interest in that.”

Gould believes his acceptance of ayahuasca as a psychedelic therapy was aided by its rich cultural history with indigenous people and their ceremonies. Evidence of ayahuasca use in South America dates back a thousand years.

He isn’t sure exactly when he first decided to try ayahuasca, but Gould knew he had to do something.

“It was a necessity,” Gould says. “I just got to a spot where it was not sustainable.”

Gould had gone back to working in finance. Now he knew he would have to leave his job and make other dramatic changes.

He did a lot of research. As he learned more about ayahuasca, he became more open to trying it. Finally, he decided on a retreat in Peru. “I think I actually applied with my work email.”

At the start of his South American trip, Gould was still skeptical ayahuasca was the answer, still searching for another solution. Which explains his “impromptu completely out-of-shape Peruvian ultra-marathon.”

Still hobbled from his Machu Picchu adventure, Gould limped in to the ayahuasca retreat.

The psychedelic experiences at a traditional retreat are called “ceremonies,” and Gould had four over the course of a week.

“My first two were all-out war,” Gould says. “I think I kind of needed that, coming from the Ranger background, because if it was just a nice easy back massage I probably would have just walked away without the same respect for it.”

The effect was immediate. “I instantly knew this wasn’t what I thought it was.”

Gould felt his mind functioning as a cohesive unit, like a computer that has been defragmented. “It’s very hard to explain. It’s not like I have a different mind, but it’s like it finally connected the pieces that were fighting against each other.”

Gould had left his job and his former life behind, and now he took some time to travel and think about the next steps. He did more research. His personal experience, anecdotal stories and the science he was reading about got him thinking. Could he start a nonprofit to share the healing he had discovered?

“There are a lot of veterans that I know, a lot of guys that are my friends that are sort of at their rope’s end. You get to the spot where the treatments available to you at the VA are no longer working, or it didn’t work from the beginning. There’s this hopelessness because traditional therapy or science doesn’t have any other answers.”

He had business experience, had finance experience, felt fortunate to have the fundamentals. But this would not be a normal nonprofit. “There are no guidelines, not even fenceposts.”

The funds that sustain traditional nonprofits — grants from government, foundations and universities — none of that is available. “The way I had to write the nonprofit application to the IRS was like a very careful tightrope walk because we’re dealing with illegal substances in the US. The way we’re able to operate is that we’re introducing veterans to spots where they can have the choice of connecting to these indigenous cultures and traditions.”

Because the size of the veteran mental health crisis, Gould knew it wouldn’t be easy. Still, progress has been more difficult than expected. “We already have a wait list of over 300 veterans. If we had a bigger social media following it would easily be in the thousands or tens of thousands.”

Gould believes veterans have an important role to play in the acceptance of psychedelics. ”It’s all about the messenger. You need to have that baseline, you need to have the facts, figures, the science and research, but what sways people is the message and who’s delivering the message.”

As a small organization, Gould believes what the Heroic Hearts Foundation can do most effectively is rally hearts and minds. Helping veterans on the ground level. Sharing testimonies. Giving information to people who would not normally talk about psychedelics.

So it’s a different kind of ultra-marathon. Once again, he may not have been fully prepared, and the path forward is harder than expected. But one gets the sense Jesse Gould won’t stop until he reaches the finish line. And this time he will not be alone.