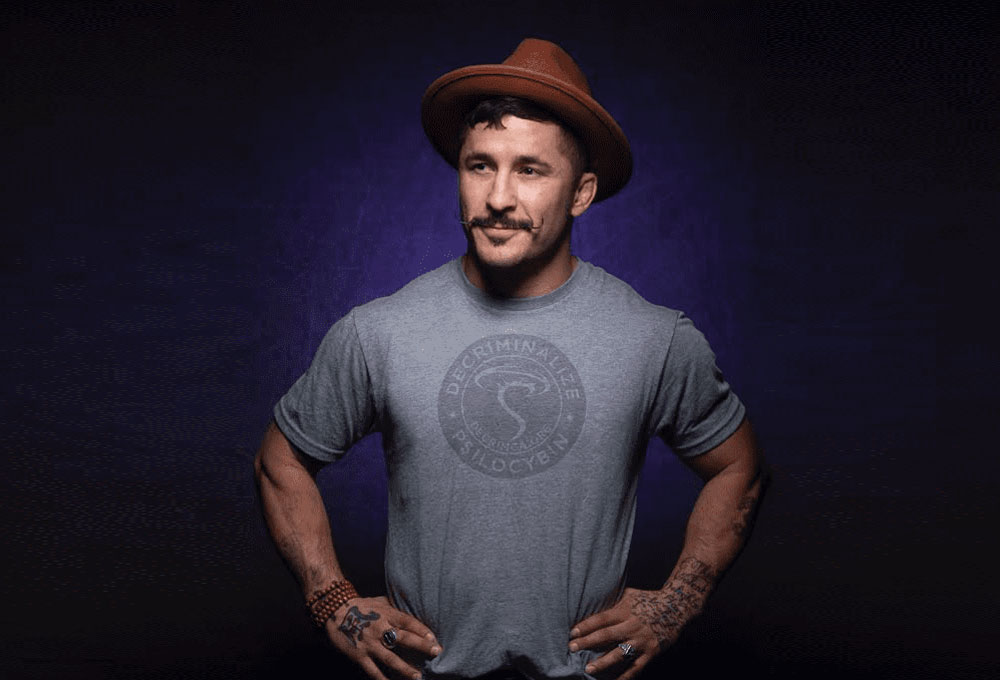 Psychedelic advocacy is filled with all sorts of healers: therapists, PHDs, psychiatrists, shamans and scientists. Also this one guy who can easily choke you unconscious.

Ian McCall is a mixed martial artist, a former professional fighter, now retired, who fought at the highest level of his sport. And he’s a passionate booster of psychedelic therapy.

How did McCall go from hurting people to helping people? First he had to get well himself.

“I was on suicide watch when I retired,” McCall says. “I was a mess. I was broken.”

It will surprise no one to hear the sport of mixed martial arts is brutally difficult. Competitors attack one another in a cage until their opponent submits or is unable to defend themselves, saved by a referee.

What’s less understood is how truly elite these athletes are.

Carlon Colker, a Connecticut physician who has trained or advised sports champions like Shaquille O’Neal and Andre Agassi told Sports Illustrated, “If you’re going to measure every parameter [endurance, flexibility, coordination, strength], without a doubt, MMA fighters are the most accomplished athletes out there. It’s not even close.”

At the height of his career Ian McCall competed in the premier mixed martial arts promotion, the Ultimate Fighting Championship (UFC), a multi-billion dollar enterprise that holds events all over the world.

Many believe MMA formally completed its march to the sports mainstream in May of 2018 when the UFC signed a five-year contract with ESPN valued at 300 million dollars a year.

Today McCall has found success as a coach and a teacher — a self-described “alchemist” and “biohacker” — who has found his calling in micro-dosing psilocybin, the active ingredient in magic mushrooms.

McCall’s excitement is contagious, gaining intensity as he speaks. He has the passion of the newly converted, the energy of a motivational speaker and the vocabulary of a PhD student studying cellular biology. At one point he interrupts his own breathless explanation of peptides and nanoparticles. “You know what an exosome is, right?”

I didn’t. I mean, I looked it up, so now I know exosomes are just membrane-bound extracellular vesicles produced in the endosomal compartment of most eukaryotic cells. But at the time he had lost me.

One more thing you should know about Ian McCall before we go on. He wasn’t just an elite fighter at the highest level of his sport. He was maybe the best fighter.

On March 3, 2012 McCall fought Demetrious Johnson in the first Flyweight (125 pound) match in UFC history, as part of a four-man tournament to crown a champion in the new Flyweight division. The match was ruled a draw (a complicated story in itself), but the fight ended with McCall on top of Johnson, raining down blows. The referee might have stopped the fight, giving McCall the outright win, if McCall hadn’t paused his punching to maniacally shout, caught up in the moment, playing to the cheering crowd.

This is noteworthy because Demetrious Johnson went on to become the consensus best pound-for-pound fighter in the world, holding the UFC Flyweight Championship belt for six years, successfully defending the title eleven times.

And you could make the case that McCall had him beat in their first fight.

Imagine if McCall hadn’t been addicted to Oxycontin.

“I had so much potential and I ruined it with pills,” McCall says. “And I’m not bummed about it because it’s a story that I can use to help save other peoples lives because I’m not the only one.”

McCall credits psychedelics with helping him to overcome addiction. Before he ever fought anyone in a cage, McCall was battling opioid addiction. I ask him if he started taking Oxycontin to treat injuries from mixed martial arts.

“I got addicted at fourteen.”

I’m surprised. To confirm, I ask, “So you discovered Oxycontin before you were treating fight injuries?”

“Yeah. It was just the epidemic that happened with my generation.”

On the one hand, McCall had every advantage. He grew up with two great parents, affluent in Orange County, California. “I come from good stock. I had parents who could afford to put me in jujitsu. Most of the kids who grew up in this area were rich kids.”

But even as he was developing and succeeding as a professional athlete, he was battling an affliction that grinds many down to the point where they can no longer function. And McCall nearly became a champion in the UFC.

The end of his addiction to opiates roughly coincided with the end of his career, after a chance encounter with DMT — N-dimethyltryptamine if you want to get scientific about it — a hallucinogenic drug that is the main active ingredient in ayahuasca. Psychedelic enthusiasts will know ayahuasca is the brew ancient Amazonian tribes used for spiritual and religious purposes.

“I smoked DMT and it really opened my eyes to what I needed to do.”

The experience sent McCall on a whirlwind of learning and obsessive research into psychedelics and magic mushrooms. “Talking, reading, podcasts, podcasts, podcasts!” McCall recounts, enthusiasm mounting. “This is how I got off pills! I started biohacking myself. Micro-dosing.”

“I built myself up physically, mentally, emotionally,” McCall explains. “I learned about integration. I learned so much about myself. This is serious business, this is serious health, serious healing. Yes, you can go out and have a great time at Coachella on mushrooms. That’s fine. But let's learn some common connection first. Let’s have a conscious community of people that are okay, that are all safe. You have to be safe with this.”

I ask if he’s doing any work with the effort to legalize psychedelics. Of course he is. “We’re working with [Decriminalize California]. Ryan Munevar. We missed this year because of Covid. In two more years we’ll be able to get it on the ballot. This is all happening so fast. It’s going to pass for sure. We’re going to make this happen.”

Well, he’s got me convinced.

One of the reasons McCall is so fired up about psychedelics is the potential to heal the human brain.

Although MMA fighters suffer fewer blows to the head than boxers — and arguably NFL players — they are certainly susceptible to brain injuries, including Chronic Traumatic Encephalopathy (CTE), the degenerative brain disease that results from repetitive brain trauma. CTE made national headlines after a couple of NFL players shot themselves in the chest to preserve their brains for autopsy.

I ask if anyone gets out of the fight game without brain damage.

He sees some of the same problems in MMA fighters and soldiers returning from combat. “Whether you’re in the military or an athlete you’re put on this pedestal, you’re larger than life. You’re celebrated. It’s a badge of honor, it’s so beautiful. And once we’re done with that, no one knows who you are. There’s no sense of self. You’re lost. I was there. Broken. I see these people going through it. And when you’re brain damaged, when you’re compromised like that, you’re often acting out, often abusing your loved ones.”

Epigenetic neurogenesis, McCall explains, is the healing of the brain itself. “Whether it’s toxins, drugs, whacking your head on things, subconcussive blows, loud music — everything can build up plaque in your brain. They always thought there was no way to fix that, but there is. Psychedelics do that. They fix that.”

Again I feel the need to confirm. “So psychedelics can repair and reverse damage from TBI (traumatic brain injury) and CTE?”

McCall points to work he is doing with Unlimited Sciences, a psychedelics research nonprofit that describes itself as combining data and lived experience for education and informing public policies.

Whatever research is left to be done, it’s clear McCall is already convinced.

“Psychedelics heal your brain. They fix the receptor sites and neural pathways. You have each hemisphere of the brain going back and forth a lot more. New pathways can be built. Old ones restored. ‘Flow state’ is a broad term meaning each sense gets hyped. That lends itself to every part of life, whether you’re doing a sport or not. Whether you’re functioning on a computer or with your kids, or anything, you’re far more efficient. With athletes that’s where I take it to the next level. These things make your brain evolve. That’s what people aren’t understanding. You’re producing chemicals in your brain, certain molecules that expand consciousness, that make you smarter. The science is there. The scientists say, ‘I can’t say this, but… it makes you smarter.’ I’ll say it! It’s made me smarter.”

I’m certainly not going to argue with him.