What is psychedelic art? This guide takes you through the discipline plus three artists to put in your gallery. 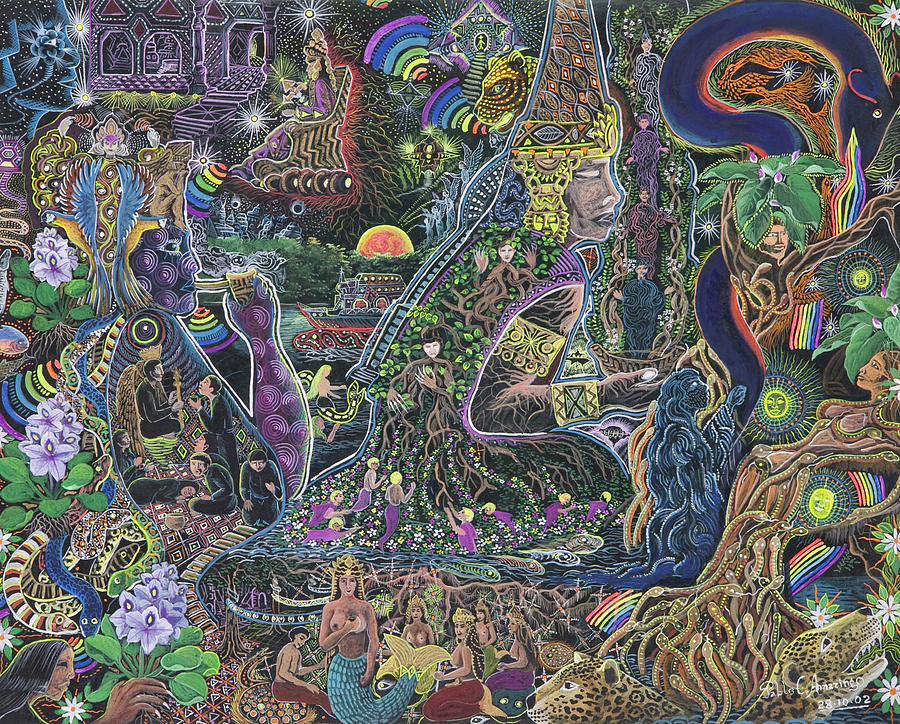 Psychedelic art has been around for thousands of years across cultures across the globe. Artists today have transformed the techniques and subject matter in innovative ways. Psychedelic art is defined as the depiction of the inner world of the psyche via art. But what exactly does that mean>

What is Psychedelic Art?

Psychedelic art is a visual or graphic display inspired by hallucinations or psychedelic experiences that are caused by the ingestion of drugs like psilocybin or LSD. The term “psychedelic” meaning “mind awakening or mind-manifesting“ was introduced by British psychologist Humphry Osmond.

Generally, psychedelic art is referred to as the art movement of the 1960s, which featured animations, spiritual concepts, fluorescent paints, geometric and freeform shapes, cartoons, bright rainbow colors, and highly distorted visuals. However, psychedelic art continues to be incorporated in today’s advertising, popular culture and music.

After world war II, there was an enormous spike in the birth rate, and about 76 million babies were born between 1945 to 1957. When these babies became young, they started questioning the political and cultural norms of America. In the 1960s, these young people wanted to create a society free from discrimination. Because of this, art and music concepts and themes focused on civil rights, Vietnam War, feminism and legalizing recreational drugs.

In the 1990s, the rave movement became the revival of the psychedelic movement, and the campaign was fueled by the newly available digital technologies of that time. Computer software allowed for a more clear expression and vision of psychedelic experiences. Fractal generating software helped artists to depict accurate hallucination patterns. Additionally, the use of 2D and 3D has given unlimited freedom of image exploitation. The rave movement cultivated a new digital art style, which was partly inspired by the 60s psychedelic art posters.

As the world is making advancements with science and technology, the psychedelic artists are also adapting to digital mediums to present psychedelic art.

There are different colors that are used in psychedelic art, but the most important thing is that these colors are bright, vivid, with extremely high contrast. The use of high contrast and bright colors makes the art more exposed and saturated. Bright colors also evoke powerful emotions and strong energy. As a result, psychedelic art stands out from the crowd.

Psychedelic art is a unique art, and many artists devoted their entire life to the development of this art. Here are some of the most popular Psychedelic artists:

Although the name of the artist is “Normal,” there is nothing normal about the artwork of David Normal. He is one of the most popular psychedelic artists of all time; he started painting posters for a punk band as a teenager. From making psychedelic posters for a punk band, David turned to theater, 3D animation, and film production. David changed each of the fields he entered with his psychedelic artwork. The paintings of David Normal illustrate religion, spirituality, sexuality, and urbanism.

Pablo Amaringo was a famous psychedelic artist born in 1938 and died in 2009. He is known for his colorful and vivid paintings. He was introduced to the west in 1985 by Luis Luna and Dennis McKenna, who met him while traveling. He painted hallucinations visions on the suggestion of Luna, which was the baseline of the book “Ayahuasca Visions: The Religious Iconography of a Peruvian Shaman.” The painting of Pablo Amaringo featured mystical imagery, spirits and strange, weird characters from the parallel universe.