'The Hero's Dose': Ancient Psychedelic Therapy Gets a Modern Exploration

'The Hero's Dose': Ancient Psychedelic Therapy Gets a Modern Exploration 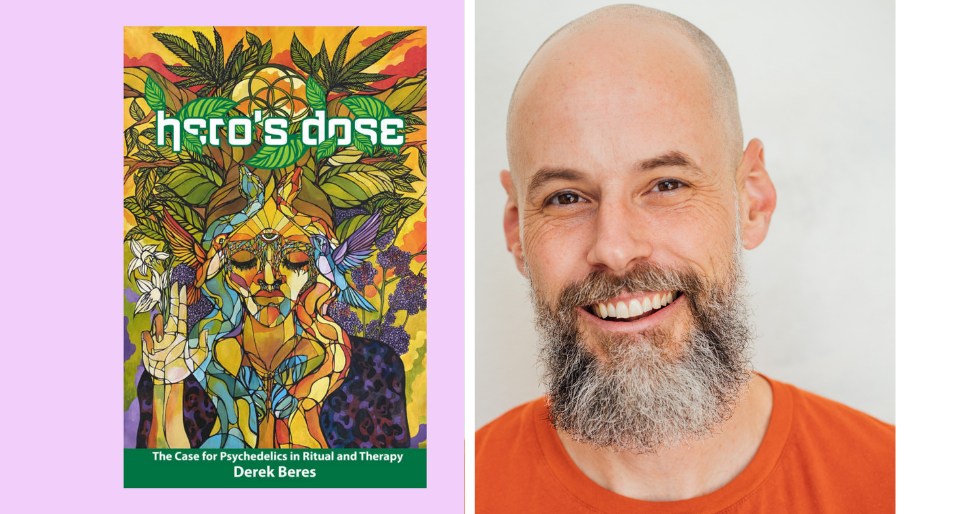 The idea to write about his quarter-century psychedelic experience had been rolling around in Derek Beres’ head for a while. Perhaps it would be something that would appeal to others who dabble in ‘shrooms or acid. Or maybe it could be a primer for those curious about trying psychedelics one day.

Thing is, Beres never really thought of himself as a memoir kind of guy. He’s more “anti-memoir,” he says, talking by phone from his home in LA’s Palms neighborhood. He doesn’t flood his social media with selfies. He’d rather post photos of things he observes rather than of himself. A memoir would be so out of character.

But when he thought about it, some of his favorite books were written by people who shared stories about their own lives. “I love a well-written memoir; Pablo Neruda’s memoirs are my favorites of all time. And Oliver Sacks does a lot of memoir writing in his science books, and I’m a huge fan of that,” he says. Then he picked up Mary Karr’s The Art of Memoir, in which Karr makes the case for why writing about your life experiences are beneficial to others. Beres thought, “You know, let me give it a shot.”

But when he finally sat down in his home office, fingers hovering over the keyboard of his iMac ready to type out the book that would become Hero’s Dose: The Case for Psychedelics in Ritual and Therapy, he realized he had a much bigger story to tell.

The Exploration of Consciousness

Beres is no stranger to writing. He’s a former reporter and magazine editor, and has written for publications like MTV, Rolling Stone, Village Voice, Women’s Health and Yoga Journal. He’s also a columnist for BigThink, Head of Content Marketing for Centered, marketing writer for StackSocial, and, now, a content contributor for Psychedelic Spotlight. In 2017, he published Whole Motion: Training Your Brain and Body for Optimal Health, which explores how exercise affects the brain.

Beres is also a yoga and fitness instructor and creator of Flow Play, a program that he uses to teach group fitness instructors the “intersection of music, neuroscience, and movement.” He streams yoga classes, sometimes with the interference of his cat; has released three albums and four EPs with EarthRise SoundSystem; produced records; served as music supervisor for the documentary DMT: The Spirit Molecule; and is the host of the EarthRise Podcast and co-host of Conspirituality.

“I like to keep things interesting,” he says. “It’s like, by being able to speak a lot of languages you are able to converse with more people. When you have a broad range of interests, you’re able to have conversations and learn about a lot of things.”

It’s like Beres is drinking out of a fire hydrant, but he can’t quench his thirst for more understanding, more experiencing. It’s a curiosity he says that keeps his mind young and healthy. It’s always been there. Growing up in a suburban New Jersey town “free of faith” (his father had enough of his Russian Orthodox upbringing to put Beres through it and his mother was a seldom-church-going Catholic), he chose to study religion at Rutgers to better understand why people believe what they believe.

Storytelling? He learned that. Or maybe it just came naturally. But, 25 years later, as he started writing the story of his own life, something began nagging at him. “I couldn’t ignore my longstanding anxiety disorder while writing about my psychedelic experiences,” he says.

That triggered the research journalist in him to dive deeper into the rabbit hole of psychedelics. To explore their history, chemical makeup, the early, promising research, the cold dark years of the War on Drugs, and the emerging renaissance of psychedelics and the possibilities it holds, especially for those with mental disorders.

Beres was 16 when he had his first panic attack. It was the beginning of a 25-year run of random and intense bursts of anxiety that kept him suspended in a constant state of dread and fear. At one point, a doctor wanted to treat his “chemical imbalance” with a pill. In time, Beres found his own way of coping.

That’s not why Beres tried psilocybin at first. That experience coincided with his newfound fascination with religion at Rutgers. But he discovered when he was tripping, “My incessant anxiety is absent,” he writes. “I’ll spend a lifetime pursuing this feeling, one that resides at the heart of both religion and the psychedelic ritual: being comfortable in your skin.”

The mushrooms and acid quelled the symptoms of the panic attacks, but they didn’t stop them from happening, he tells me. They still came, unannounced. He continued to live with the fear for decades — until five years ago. What made them stop, he says: “Was a change in my diet, which I didn’t expect. I went from being a longtime vegetarian to eating a more paleo style. Just more meat in my diet.”

Living with anxiety for 25 years gave Beres a sensitivity to mental health and a keen insight into how psychedelics can help. And while he isn’t totally against pharmaceuticals (he is a cancer survivor thanks, in part, to chemotherapy) he is critical of the pharmaceutical industry. For example, its Band-Aid use of antidepressants like serotonin reuptake inhibitors (SSRIs). Billions of SSRIs have been prescribed in recent years increasing in lockstep with the number of anxiety and depression diagnoses. These drugs are often taken for years with known and unknown side effects. Comparatively, Beres points out in Hero’s Dose, studies suggest that a single dose of psychedelics may be enough to heal someone.

Beres chose the name “Hero’s Dose” for his memoir for two reasons. One, for the “heroic dose” of mushrooms described by Terrence McKenna, the “Timothy Leary of the '90s,” as proclaimed by Timothy Leary himself. A dosage that, when ingested, results in a powerful and life-changing experience.

The other refers to the monomyth described by renowned author Joseph Campbell in The Hero with a Thousand Faces. The book became a common template for novels that involves a hero who goes on an adventure, is victorious in a crisis, and comes home changed or transformed.

We walk that course with Beres in Hero’s Dose, into the spaces where his psychedelic adventures began. Early on, they were frat parties and college apartments. Sometimes there were mountaintop views. Later, they were calming Ayahuasca ceremonies under the guidance of a trusted Shaman. Once, he came face-to-face with his demons, a crisis that didn’t quell his interest in psychedelics but rather drove him to experience them more thoughtfully.

But these personal moments take up just a fraction of the book. After each trip scene, just as your head begins to spin, Beres draws the reader into a riff about research, studies that show how drugs like psilocybin, LSD and MDMA can help treat a rainbow of mental health issues including alcoholism, drug addiction, death anxiety in hospice patients, and post-traumatic stress disorder. Research finally taking place again after being stigmatized and criminalized in the 1960s.

And that, Beres says, is a step toward the world discovering just how uniquely qualified psychedelics are in addressing some of the greatest social problems of our time.